This brief history has been drawn from the account written by Fr. Jeremiah McCarthy, the first Priest at St. Finbarr’s, and from the memories of parishioners. Many thanks to all who have contributed. 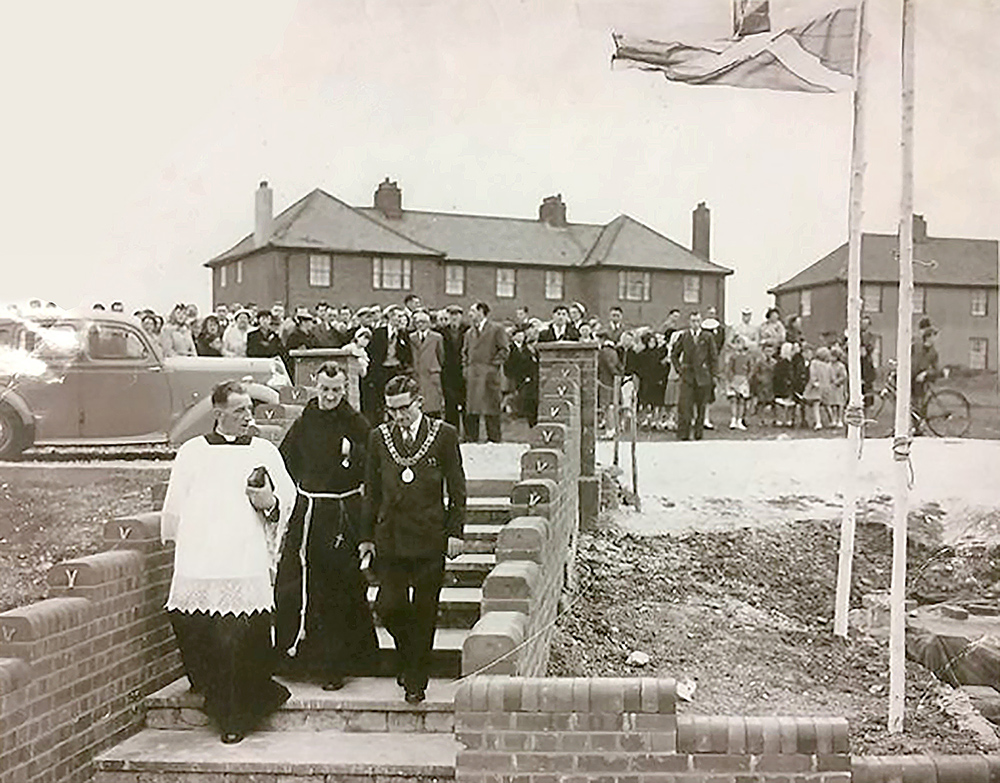 The first houses in Aylesham were built in May 1927. Mass was first said here in a private house in Ackholt Rd. The Priests from St. Thomas’s in Canterbury served this area at the time. and occasionally the congregation would make an excursion to Canterbury. In 1929, a little church was built, dedicated to St. Joseph, and the first resident Priest arrived. His Presbytery was in Bell Grove. Almost all the miners, whether Catholic or not. paid five shillings a week to support him and the Church. In 1934, premises were added to the Church, which would eventually provide the basic structure for St. Joseph’s. Catholic children at the time attended the ‘wooden school’, which stood on the site of the present youth club. In the basement which now houses the nursery school, was a very well used billiard hall. The slates from the billiard tables are now the steps leading down to St. Finbarr’s. It’s called recycling. The hall, where the classrooms are now, was used for wedding receptions, dances and other social functions.

In May 1941, while Fr. O’Friel was the Priest, the whole building was seriously damaged by bombing. Four houses in Bell Grove were destroyed, and nine people were killed. Fr. O’ Friel could be said to have had a lucky escape, because the houses were directly opposite his. Towards the end of the war, German prisoners, who were interned at Goodnestone, were allowed out; a captured German Priest, with his own altar boys, used to say the I lam Mass at St. Joseph’s. It was they who, at Christmas 1945, built the first crib many of the youngsters had ever seen.

1947-1957
It was 1948 before the repairs were completed, and the buildings at that time were extended. The school finally opened in 1952. The school playground was levelled off by volunteer miners, using picks and shovels and wheelbarrows. There were no JCB’s in those days. The little church led a double life: school canteen, Monday-Friday, makeshift church Saturday- Sunday.

In 1950 the present site of St. Finbarr’s was purchased, and several schemes for new buildings were explored. Mr. J. W. Pollock, the architect, came up with a design for church and church hall, which seemed to fit the needs and the purse of the community. However, his proposals, though modest, went well beyond the economies of country, diocese and parish, all three of which were in a poor state after the war. Reluctantly, the Catholic community had to accept a building of pre-cast concrete, which would have the dual purpose of church and hall. As Fr. McCarthy said in his account, this had the ‘advantages of space, durability and relative cheapness.’ The building he is describing is, of course. St. Finbarr’s, which intended eventually to serve as the parish hall. He went on to say, ‘The further chapters which remain to be written are the building of a worthy, decent church, and a Priest’s house on the same campus.’ The second of these chapters has been written, though not in stone, the first remains as yet only as a first draft.

The Church was blessed on Low Sunday, April 28th 1957, at the 11am Mass by Canon de Laubenque.

The last couple to be married at St. Joseph’s were George and Bett Gilchrist. The first couple to be married in St. Finbarr’s were Wendy and Eddie Mathers. Eddie’s father Joe was the
organist for both churches for many years. Our Patron, St. Finbarr, was Bishop of Cork; he was the founder of a famous monastery, and virtually the founder of the city. His settlement on the tiny lake island of Goughan Barra is place of pilgrimage. Probably Fr. McCarthy’s Irish heritage prompted the dedication, but the Bishop certainly approved of one of the Celtic Saints as patron. ‘St. Finbarr’, wrote Fr. McCarthy, ‘will very readily appreciate our wants, and provide for them. ‘ Parishioners and friends, many of whom still have family and relatives in the village, worked and gave generously to provide everything from the organ to altar cloths. Two names need to be singled out. Mr. O’Donovan (affectionately known as Pop) was the first Headmaster at St. Joseph’s, and did a great deal for the church. Jim Cooney did an enormous amount for both churches. He was the main instigator for digging out the ground for both school and church. He even lived for a time in a caravan on the church drive. Both these men received the Papal Medal. The site of the church was levelled by miners in preparation for the foundations; much of the outside work, including the boundary wall, was undertaken by them at no cost. It is truly a community-built church. (see noticeboard) Fr. McCarthy’s account finishes as follows: ‘Unfortunately we finish with a heavy debt, roughly E8,000. I know that the Aylesham people will continue to play their part; it might well be that some devotee of my beloved St. Finbarr, even outside our bounds, may wish to help our small parish. The picture (see noticeboard) gives an impression of what is done and — less clearly, dream fashion — what we hope to do. We look forward eagerly but confidently to our dreams-come-true. ‘ The debt was thankfully cleared, the dreams are still to come true. 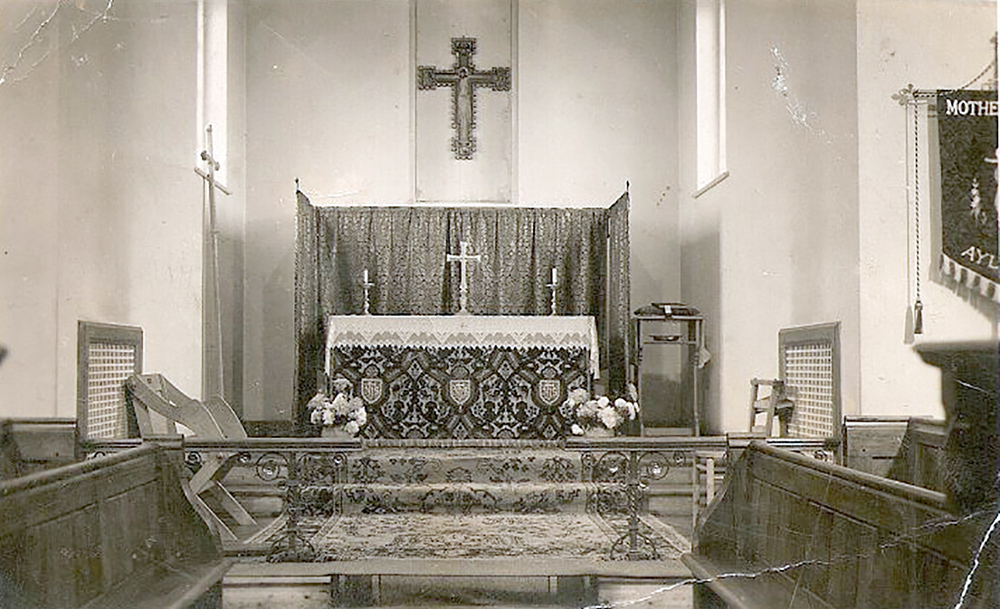 The Church had a thriving youth club, set up by Pat Yore and his brother. Both St. Finbarr’s and St. Peter’s had their own football clubs, and when the two teams met on the field that is now part of ‘Brookside’, it was just like Celtic and Rangers. The Legion catered for women and children, and organized trips for them. Young Catholics seem to have had plenty to keep them occupied. Until after 1965 and the Second Vatican Council, the sanctuary of the Church was set behind a beautiful altar rail, at which the people knelt for Communion. The high altar was at the far east end, and there were blue curtains to divide the altar area from the rest of the Church, when social functions were held. There were many and various events: festivals, parties, dances and celebrations. Because Aylesham was such a close mining community, everyone knew everyone else, and everyone ‘chipped in’. Some parishioners were a little sad to see the altar rail and other things disappear, but there is no doubt that the Church gained as well as lost, from being opened up.

1966-97
There followed a further twenty years of peace and comparative prosperity; many families had children who were educated at St. Joseph’s and then the Secondary School. The community grew and Catholics adjusted to the Mass in English and the revised rite. Then came the closure of the mine. As one parishioner said, ‘This was bound to rock the community for a while, but the people of Aylesham were aware that we had to fight back, and we did so. We went forward, if slowly at times. There are now young adults in the village, who were not born at the time of the closure, and change is inevitable, if we are to survive.’ Now Aylesham is poised on the brink of regeneration and vast expansion is taking place. This is a chapter that Fr. McCarthy could not have foreseen, but we hope it will bring his dream closer to fruition. 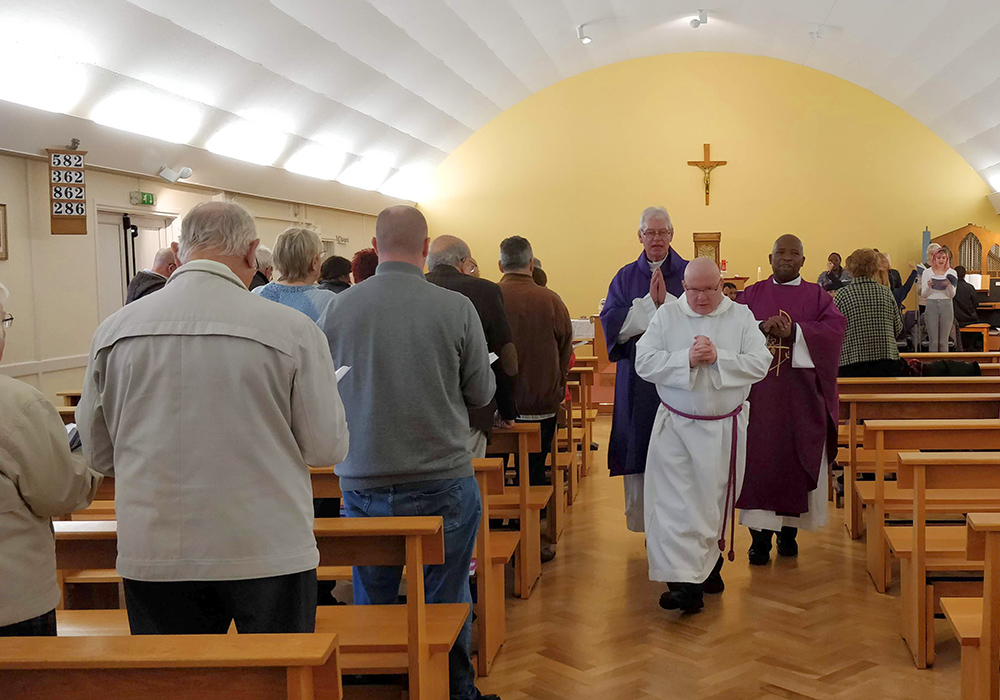 During Fr. Bernard Winn’s time, the sanctuary was opened further, and the raised dais built. Fr. Bernard also procured the wooden statues of Mary and Joseph from St. Augustine’s Hospital in Chartham, when it closed. Aylesham, and in particular St. Finbarr’s, have always been friendly and welcoming. It is not surprising that gradually more and more people from surrounding villages have come to regard St. Finbarr’s as their own Church. They may have lived for a long time within the parish boundaries, which are extensive, but had never realised that they could be at home here.

This broadening of the congregation has been partly brought about by Fr. Jeff’s influence. Fr. Jeff arrived in 2002 and enlivened the scene. The Church is now used for ballroom dancing, Snowdown Male Voice Choir practice, and village teas. As he has said himself, ‘We are never quite sure what is going to happen next. ‘ As well as a highly popular Children’s Liturgy, we have a lively choir, a First Communion Group, and an SVP Conference. We have recently introduced Exposition and a weekly Mass on Wednesdays throughout the year. We enjoy good ecumenical relations with St. Peter’s, the Baptist Church and the Bruderhof Community in Nonington. Our church building was refurbished inside in 2015, and is now an attractive, light and airy space. The Cross outside the church is a story in itself. War- wounded in London, it came to Aylesham, where it was painted and erected on the grass patch in the drive. Three years ago, in a very high wind, it was uprooted and suffered further damage. Paul Smye-Rumsby took it home and lovingly restored it. It was consecrated in its present position on Good Friday 2007. The wood of the Cross bears its scars gracefully, and it adds beauty and holiness to the exterior of the church. In 2015, St. Finbarr’s Church was amalgamated with St. Paul’s Church in Dover, to form the Parish of the Good Shepherd, with Fr. Jeff as Parish Priest of the new Parish. We pray that our two Churches within the Parish may have an ever-closer relationship and work together as a witness to God’s love in our area of south east Kent.

Priests – St. Joseph’s/St. Finbarr’s, Aylesham
St. Joseph’s was started from Canterbury in 1930 by Canon Shepherd who was helped by Father J. O’Connell. In 1957, St. Finbarr’s Church was blessed by Canon de Laubenque.