History
In 1864 the Bishop of Southwark, Dr. Grant, finally received the legacy which had been left by the Countess de Front, who it was thought was the wife of a Sardinian Ambassador to England. This good lady, who had regularly travelled through Dover to Windsor where she stayed at the British Court, had died in 1830 leaving the interest of her fortune to her brother, Sir Thomas Fleetwood. He died about 1860 but the money did not immediately go to her beneficiaries, the parishes of Windsor and Dover, for she had caused legal complications by mentioning Dover as being in the Diocese of London. However, after a legal action in which the Will had been unsuccessfully contested, the legacy which was to provide the initial capital for the new Dover church was handed over to the bishop.

When the surveyor came to inspect the site in Ashen Tree Lane he pointed out that half the money available would have to be spent on levelling the ground and advised that it be sold and a new site bought. Father Laws was quite willing to do this, and on 1st June, 1867, building work started in the Maison Dieu Road on a piece of land bought from Johnson’s Nursery for £450.

The architect employed to design the church was the famous Augustus Welby Pugin’s son, Edward W. Pugin. True to his father’s ideals he designed his church in the Early English style. It had a commanding position at the end of Pencester Road in a fast developing area. On 15th May, 1868, with the apsidal east end still incomplete, St. Paul’s Church was opened.

The opening ceremony is described in the Dover Express of the same day:

“The new Roman Catholic Church in Dover was opened this morning with much pomp and circumstance… The opening was to have taken place on Wednesday but owing to an invitation Dr. Manning had received to be at the laying of the foundation stone of St. Thomas’ Hospital by the Queen the ceremony was postponed until to-day. The postponement was the cause of an odd mistake which has caused quite a flutter of excitement in the breasts of Constitutional Protestants. The handbill announcing the postponement was drawn up in so slipshod a fashion as to make it appear that her Majesty had invited Dr. Manning to be present. The blunder was too gross to mislead ordinary people…”

The High Mass was sung by Dr. Grant, Bishop of Southwark, and Dr. Manning preached the sermon on the text, ‘One Church, One Faith, One Baptism’. The music was Mozart’s Twelfih Mass sung, according to the newspaper report, by an efficient choir”; the choir, in fact, came from Gravesend.

In 1870 the Elizabeth Street Chapel had been sold and the adjoining school-room with it. Two large rooms were rented in Castle Street for for another school and the number of children increased to 65. In the same year the Diocese bought 102 Maison Dieu Road for a new presbytery and Father Laws, who had been living first at 43 Snargate Street and then in St. Martin’s Street, moved into the new house next door to the church. The necessity for a school nearby led at last to the building of the boys school next to the east end of the church which Was opened in 1872. Ten years later a girls’ school was built behind the boys school, and in 1889 an infants’ school was built: the number of children now totalled 170.

Father Laws was in charge of the mission during all this building programme. He was a man of enormous energy, well-suited to guiding the parish through big endeavours. Unfortunately, he was somewhat possessive described in a letter to Bishop Grant by his successor as a peculiar little man”-and after his severe illness had forced him to retire in 1891, he continued to influence events in the parish. The sacristy, which he had planned first to be built on the south side of the church and then on the north, was not built until 1892. Father Linnett was most upset by his predecessor’s “huffiness”, since the money for the sacristy was a legacy to Laws and the builder, Mr. Wray, was getting anxious about his account. An amicable settlement, however, was effected and when the time came for Father Laws to celebrate the golden jubilee of his priesthood in April, 1904, the whole town of Dover, Catholic and Protestant, joined in, as the mayor said, apart “from creed and prejudice”, to accord him congratulations.

That the non-Catholic authorities in Dover could give honour to Laws as a man, rather than as a Catholic priest, was encouragingly significant. He himself had reported to the Diocesan Synod in 1879.

Taken from the book “Catholic Dover” by Christopher Buckingham

22nd August 1940.  A German shell falls very close to our church.  Count the bicycles !!  The houses next door to the presbytery were not so lucky.  They suffered quite significant damage as can be seen. 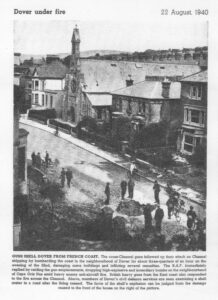 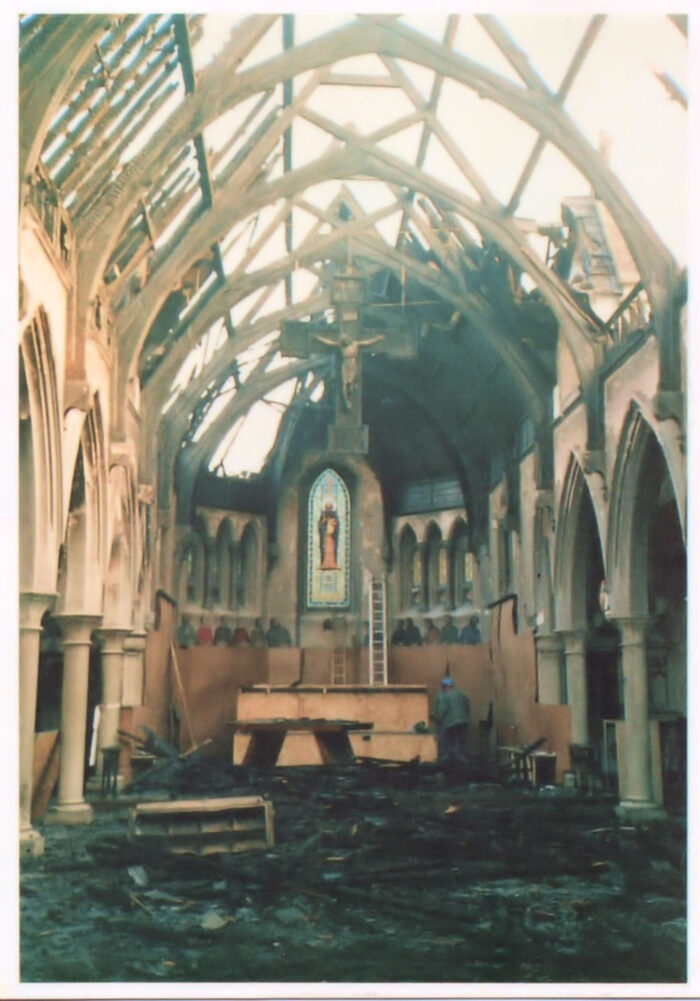 On 23rd October 1987, our beautiful church was the target of an arsonist.  Whilst unlocked and unoccupied, a young man looked around and found the disused confessional (the current place of the Herald Memorial) was an ideal place to set the building alight.  Not only was the confessional wooden, but it was being used by the cleaners as a store cupboard for brooms, rags and polishes.  Having set light to this material, it was only a moment or two for the flames to rapidly grow into an inferno, and soon reached into the main body of the church, into the roof and all along to the organ gallery west end, destroying the recently refurbished pipe organ.  Though the fire brigade did its best to save the church, much damage occurred resulting in total loss of the roof .  After massive restoration, the church was opened 12 months later.

The photo shows the devastation and damage.  The pews have been removed for repairs, and the high altar and sanctuary panelling have been boarded over to protect them from the weather.  A workman can be seen just right of the altar.

Today…
Our First Aim is to offer places, in our case our two churches, where people, can be anonymous or part of the crowd, where there is a special warmth and where it is possible for people to get to know God, his ways and his vision of life at their speed. Our Second aim is, without putting pressure on those who want to sit quietly at the back, to enable members of our communities to serve others by using their talents or by ministering to our people and/or the wider world.

A story from another parish sums up our aims:
“I was enjoying a career, one that had reached heights I had never imagined, I had a partner I loved and a nice home. One Sunday for no apparent reason we decided to go to Mass and experienced a warm and welcoming community. It was a very busy inner-city parish in a community with a lot of problems, but it was characterised by a priest and people working their way towards God and helping each other as best they could. It was very much the “field hospital” referred to by Pope Francis. It reconnected me with the Church and over time, despite ups and downs, my life improved markedly.”

We a regular congregation of just over 300 spread over two churches, St. Paul’s, a lovely Gothic pile which suits its status as the main Catholic Church in Dover and St. Finbarr’s, which is notable on account of the friendly atmosphere its smaller size promotes. Both churches have a tradition of lay involvement on which we are building at the present time as the two churches are served by one priest. At one time there were three. We have a tradition of making people welcome whatever their story and even if they have never been to church before should they wish to have a child baptized, a wedding, a funeral for someone dear to them or just want to sit in the back row for a few weeks at a weekend service and see how they find things.

We have three schools in the parish. Our two primary schools, St. Joseph’s in Aylesham and St. Richard’s in Dover are very well thought of and St. Edmund’s Comprehensive flies the Catholic Flag beautifully too. All three schools do well academically.

We make it our business to look at what is going on in the wider world and help when we can. Our Deacon is presently half way through a term of three years as Chair of Dover’s Churches Together. We are proud of the team who have manned the Soup Kitchen in Dover for years, the members of our congregation who are Street Pastors and that at the present time the ecumenical venture known as The Outreach Centre, which has a very good record of helping the homeless to get rehoused used some of our premises until recently.

We are just in the process of establishing the tradition of manning the presbytery during working hours and hopefully until 9.pm each evening except Sunday. So, if you have a wonder do ring us on 01304 206 766 or send us an email.